You are here: HomenextTopicsnextPlacesnextBusinessesnextHilltop Café 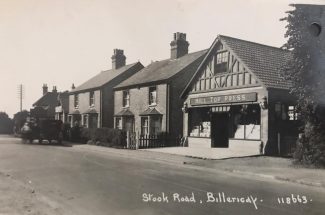 zoom
Hilltop before it became a Café

I moved from Greenford Middlesex to Billerica Essex about 1952 with my parents Francis (Frank) and Alice Scobell and my older sister Linda and younger brother Gary. My Father purchased Hilltop Cafe and we lived above the cafe for several years until my parents build a house in Ramsden Bellhouse. I had a friend who lived next door to the Cafe named Christopher Denny, I attended Billericay Secondary School infrequently as my father had me working in the kitchen with him, he felt learning a trade was more important than education. He was correct as I have been a Chef or Pastry Chef for the majority of my working life. We owned the Cafe until 1959 when we migrated to America. I have very fond memories of playing at Lake Meadows, I remember the boats and boathouse, fishing in the lake, swimming in the concrete pool, and gathering horse chestnuts at the park. I remember playing in the vacant lot across from the railway station with my friends Christopher Denny and Peter Alexander, we had a lot of regular customers at the cafe but one that I remember was a World War One veteran we called Old Tom who resided at the Hospital across the street from the Cafe, I would walk him back and forth from the hospital each day for his evening meal. After living in London I loved the freedom of living in the country as it was at that time, I returned as a visitor several times over the years and was surprised at the growth in the area and the cafe was a Chemist shop. I remember seeing my first cow and pig on my way to Wickford. Although my father insisted I work hard peeling potatoes, washing pots and pans plates and silver wear, mashing potatoes, and helping him make cakes and pies, I was always happy that I was able to spend my time in his presence. I treasure that time in my life and would not change one moment of it. It is not the worldly possessions that matter but the memories of my family my friends and those people who frequented my Dads cafe. Thank you Billericay for being such a huge influence on my life.