You are here: HomenextTopicsnextPeoplenextAudio MemoriesnextMargaret Daniels - family life in Billericay 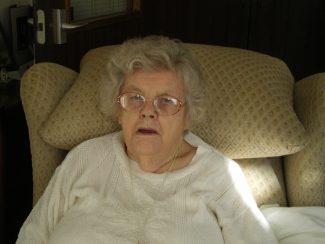 Margaret Daniels (nee Meaney) was born in County Kilkenny. Here she remembers her life in Billericay in conversation with Jennifer Fernandes.

We were getting married, I was working in Southampton and my husband John was this way – was in Essex way.  So we arranged to get married and John’s Brother- in-Law was a policeman in Abridge, Essex.  He thought he had a flat for us to come and live there, but we didn’t get the flat so we went to visit an Aunt of my husband’s at Harlow and she said to us ‘You know your Uncle Jack has died in Billericay’, she said ‘and Bella’s there on her own in a big house. Why don’t you go and see her, she might let you share the house with her.’ So we came to Billericay one Sunday and we saw her and her daughter was there. The daughter really had bought the house for her parents and oh yes she’d love to have us. So we were there for about 3 years.  I had my first daughter, who’s 61 now, there; wasn’t like having a place of your own. It’s up the road just where the school is and the crossing there – the top of Bell Hill, it was called South Villa when we were there, it’s called South Lodge now.

Anyway I became pregnant and she knew, Mrs Phillips, knew I was a bit unhappy, thinking of having a baby where I was you see, and she came to me just after I had Philomena. She said to me, ‘We’re ‘having a bungalow built across the road’ she said ‘would you like the cottage?’  I said ‘would I! I’d love it!

So I was in the house, I moved in there, Philomena  wasn’t  two I don’t think, I can’t quite remember the age she was very young anyway and we were delighted to have that little place for ourselves. It was so near the town, you know, everything was near at hand.

That’s in Chapel Street  – Chiropodist is in that house now.  Course the Cottis’ are have all gone and Mrs Phillips that used to live there before she moved to her nice bungalow which is now a load of flats built over there now where her house was, and she’s died and all the Cottis family are gone. Which is quite sad really. She was a very good friend to me and my children played with her children over there.  I had a second child four years after the first one then I went 11 years and I had a son. I was forty five when I had my son.  Forty Six he is now!

Well that’s part of my story, anyway. We were quite happy there, but of course when I had my son there wasn’t enough room, so we went to come on the council down here – Langham Crescent, which we didn’t like, then I moved to Well Meade, which was nice, looking out on the Road, there were three houses there, number six we had there until I moved 10 years ago.

Most Holy Redeemer and Canon Roche

There are a lot of changes to the High Street to what it used to be in my day.  Just a few little shops was there you know, like a little village; and they’ve gradually built up, that’s it!  But the church was there just the same, we had a great welcome from Canon Roche, Father Roche. The first thing, we went around to devotions and a lady said to me ‘You new’ and I said ‘Yes we’ve only just arrived a few weeks ago’. ‘Have you introduced yourself to Father?’ I said ‘No not yet we haven’t had a chance’; and with that Father came and she said ‘these are new people for you Father’ so he came and spoke to me ‘What’s your name?’ so my husband said ‘John Daniels’. ‘Daniels?’ he said ‘are you any relation to Mr Daniels around the corner, that died?’. ‘Oh yes’ he said’ he was my uncle’.  And so he says to the man that was serving ‘You lock up for me while I walk down with these lost cousins of mine’. And we walked down together and we were friends ever afterwards.  Every job he wanted done he come round and asked me to do.  That was Canon Roche, lovely man.

Father Roche then, became Canon just the week, 2 or 3 days before one of my daughters first Communion.

We have always been lucky with priests there, they’ve all been nice really. Big congregation now to what it was then, I mean just two Masses there was, one at 9 and one at 11 and he changed the 11 one to suit the nurses. The nurses lived in the High Street where Frizell House is and St Andrew’s was going strong of course and he changed the hours to suit the nurses time they were off so they could get to Mass – the Priest – Father Roche

I think it changed to half 11 to suit them.  A different time, something like that, he changed it round ; and then he used to have to go to Laindon to say Mass after that. At one time he used to cycle there but then a Parishioner had a car and took him; because there weren’t many cars around in them days.

There weren’t any places where you could get cups of tea.  People would stop you and say ‘where could we get a cup of tea?’ Houghton’s had been closed at this time, the one I worked at. And I’d say ‘I don’t know’. Now a day they’re full of restaurants.  You couldn’t get a cup of tea anyway then, in them days. Don’t suppose people had much money to go and spend on tea. Times wasn’t good. And there was about three butchers, now there’s a new butcher I believe down the bottom of the town somebody told me.

There was a butchers right opposite the Church. They moved out Ramsden way to live, but its closed down sometime. And so has Clarkes the Butchers, that was just by the …  opposite Woolworths.  A lovely butchers shop, that was the one we always went to – we just had to walk through the alley from where I lived in the cottage. Walked to the alley and the children could go and get it.

Ball’s factory –  Jimmy Ball had it.  He’s dead and gone now. He moved out to Jersey. A lot of people worked there but I never did. Not quite sure what they did. Something plastic I think. Something like that.

My husband ended up at Ford’s Dagenham, before that he was building. He liked that better but wet weather you didn’t get any money so it wasn’t so good. He came over here in the war and did a lot of war work, all sorts of hard work, he did. Such as laying pipes in the Isle of Wight, all sorts of different things like that. All to do with protection I suppose, in the war.

In the Isle of Wight, he worked lots of different places, some different places in Kent. I used to have letters from him you see, because I knew him in Ireland. He was Irish too you see.