You are here: HomenextTopicsnextPeoplenextAudio MemoriesnextAngela Smith's memories of Tensing Gardens 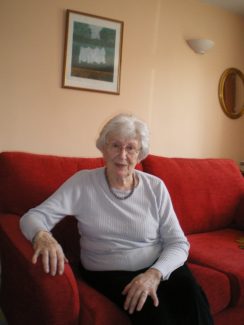 I first moved to Billericay when Bill and I were married. We had a new house built and it was one of the first new houses that was built in Billericay at that time. We were married in 1956 in the February and we lived in Barking and looking for a new house we had some friends who said you must come and look at Billericay because they had bought a new bungalow on this estate and when we came and looked, we fell in love with the site and had the house built for us. The area was farmland, so this was a complete change of use and it was called Town Farm and the fields or the farmlands extended up to behind the police station which is still there today. There was a big house in the High Street called St. Edith’s and there was a little footpath that went from the corner of the new estate up to the High Street and then down the hill to almost as far as Western Road so it filled in a whole square oblong of land there and of course those houses are now quite old after all these years but they were very modern then. They were so modern that they had the kitchens built in the front and I remember my mother saying, “Do you think that’s wise because nobody will want to buy the house from you if you want to sell it. Nobody will want to buy a house with the kitchen in front”.  But of course, it was of its time, very very modern and very attractive. I think they are all still very attractive houses.

All the streets were named after the accent of Everest so there was Everest Rise, Tensing Gardens which was where we lived and Huntsmead and Mallory Way, of course they are all still there.  This is a thriving part of Billericay but of course it is not now modern and new, there were plenty more buildings built after that.

I suppose ours was one of the first wave of houses and the farm buildings had mostly disappeared but across the road from us in Tensing Gardens there was a big old barn and I remember that was used by the builders, they stored their equipment there and when they left it was pulled down and there was all sorts of livestock and mess that were seen to be cleared away and then the last pair of houses were built on that space.

I used to push a pram up to the High Street regularly. I think it was something called an Osnath which was very upright and very bouncy. It was a completely little country village The High Street was like a little country village.  All the shops were individual shops. This was before the rise of the supermarkets and I wish I could remember which supermarkets came first. Self service was the thing that was the big change, so we saw the change from being served across the counter by somebody who would say “Can I help you” and pass the goods across and rang up on the till, to going around with a wire basket and picking up what you wanted. At that time it did seem quite a revolution. It was quite amazing and we suddenly realised that we had seven self service shops in the High Street but they weren’t the big supermarkets at that time. They came later on, but what year I don’t know but I’m sure somebody will be able to say.

As I now live in Maldon, I don’t know if Leyland’s is still in the High Street, it was an ironmonger’s shop. It was on the Church side of the High Street run by a man called Jasper Leyland, I don’t know how old he was – he seemed very ancient about 60 at that time, but he used to ride a penny-farthing bicycle every year in the Billericay Carnival. He would be a feature, he would ride his penny farthing bicycle waving from side to side down the High Street and he owned this business which was a family business and he sold nails and screws from little boxes across the counter, but I think that has long since changed and I do believe it is now Peacocks. That’s where that shop was.

I  left I think eleven years ago and since then you seem to have a vast number of  places where you can go and get a cup of coffee or just eat a casual meal which is very nice.  But some shops are still very much the same like Shelley’s. The pubs will go on forever and haven’t really changed. I remember a New Year’s Eve once  in the Red Lion which was lovely. I think it was quite delightful, I was probably on a high because I was expecting my first baby and she was born in February, so there I was drinking, I don’t what it was, Double Diamond I expect at that time and somebody got on the piano and yes there was dancing. Again nothing like the dancing would be now and I remember there was lino on the floor at the time, I don’t know why I remember that it was just a very happy time. We were there as young marrieds, our house in Tensing Gardens and so that was 1957, I suppose.