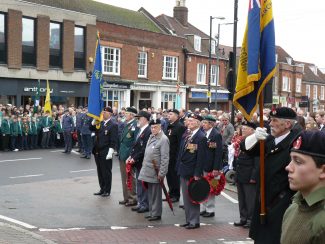 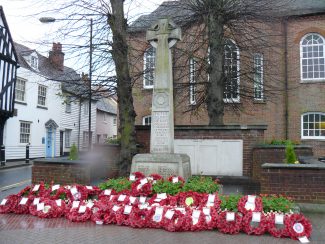 zoom
Wreaths at the Memorial after the Service
Jim Devlin

Sunday 14th November dawned cold and dull. At 10.15 the Army Cadets led the parade along the Hign Street to the War Memorial on the triangle outsdie St Mary Magdalen. The members of the British Legion formed up directly in front of the Memorial with the Army Cadets in Chapel Street and the Air Cadets, Scouts, Guides and Brownies in the High Street. The service was led by Rev.Paul Carr, rector of the Billericay & Little Burstead Team Ministry.

At 11.00, as the rain began to fall, a bugle call announced the start of the two minutes silence and the town fell still. The end of the silence was signalled by a further bugle call and wreaths were laid by many organisations with the town as well as by individuals.

Recently each year the attendance has increased and this year was no exception.