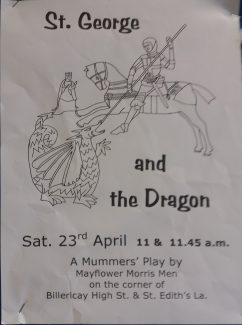 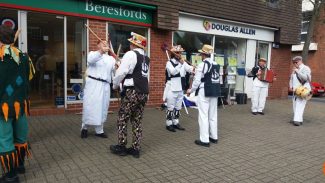 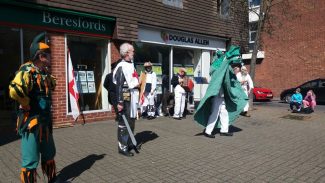 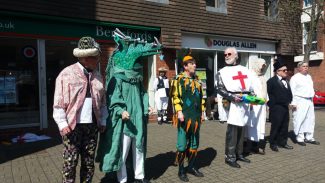 On 23rd April 2016 a group from the Mayflower Morris Men performed in Billericay High Street, Billericay, Essex,  England .   It was a tribute to the patron Saint of England, St. George whose Feast day is 23rd April.

Now that we are post Covid, this year, 2022, there will be a performance again in Billericay High Street.

George’s reputation grew with the returning crusaders. A miracle appearance, when it was claimed that he appeared to lead crusaders into battle, is recorded in stone over the south door of a church at Fordington in Dorset. This still exists and is the earliest known church in England to be dedicated to Saint George.

In ‘Scouting for Boys’, Baden-Powell referred to the Knights of the Round Table in the Arthurian Legend, and to St George who was their Patron Saint. He then went on: ‘He is also the Patron Saint of Scouts everywhere.

Saint George died 23 April 303) was a Christian who is venerated as a saint in Christianity. According to tradition he was a soldier in the Roman army who was sentenced to death for refusing to recant his Christian faith. He became one of the most venerated saints  and has been especially venerated as a military saint.

He was chosen as England’s patron Saint in 1350, by King Edward III. St George was admired for his bravery in the face of terrible suffering, and he was popular among European Knights and military men.